Yesterday visited the Beijing Summer Palace. So called because the Pricess Royal’s used to hold office from there when the weather was hot and they felt lazy.

It’s about the size of Alton Towers so don’t expect to get round there, then go on and do Tianamen square or one of the markets. 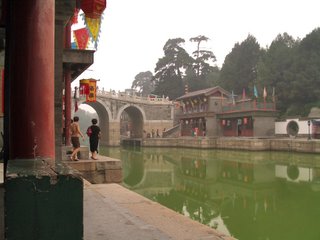 Before we start, I am staying at the 5 star Lufthanser hotel.

The last couple of nights I’ve been trying to seek out by my own means the main tourist bar area which I found last night and had a couple of drinks with some other tourists.

Had some sheeps testicles. No pictures there. Although a before and after would have been nice. Which was in the 1000 nights Lebanese Palace in the diplomatic zone not far from the clothing market. I have a map below which I have marked a couple of spots I would recommend to give you a good idea what the city is about.