Since I’ve just been turning around in the boat, my last 3 stops retraced back. That means on the last 3 journeys, I moved from Pig Place to Aynho, then back to Pig Place again.

CRT sent me a warning email about not moving the boat far enough.

As a continuos cruiser, you have to move 21 miles or more direction wise in any year of your boats operation. This counts as the licencing period, which may run from June to June, for example…

Once you reach the June, the annual period re-sets. My licence came due whilst I was at Pig Place and when I had turned around and came back, it was in a new year.

Effectively, they’d sent me an overstay but, due to the fact my licence had renewed, it was invalid.

Got onto them. They changed it pretty rapid, which is a good thing. I was none too happy.

Not sure if the recorder, an individual who walks up and down recording the length of stay of boats from the towpath, had recorded it wrong.

That’s what I’d put it down to anyway.

I decided not to do a post about my location but about weddings and birthdays, which we seem to be having a lot of….

Kerri, my big sister, has had her 50th in the last few days.

We took her out to a restaurant in Cheltenham, with the family.

On a Monday, it was a fairly low key affair, and we were all finished up and in bed by 11pm.

‘Where the dear and the antelope play’…

We have some buffalo in the field opposite.

So it could be, ‘where the pigs and the buffalo play’.

Had to go to Aynho Wharf. For water.

Came back up again. Took about 2.5 hours from where I was before.

The water takes forever to fill up at Aynho because of the low pressure.

Solar and the cost of living

Able to do all my cooking on solar now the sun’s out.

That means I only use the gas now for:

Made a 13kg calor last for 4 months last time.

Equates to around £10 per month for gas.

All in all, £22.50 currently in monthly overheads on the boat.

Had a slight bit of wear and tear on my front and rear ropes.

As you can see, the rear rope is frayed and the braiding is coming undone.

I’ve tried to strap it up with some handlebar tape.

It’s really starting to become a hazard, especially in locks, where it can become entangled in things such as the rail bar, or not fly through the air properly because part of the rope become entangled on your hand as you try to throw it.

For this reason, I had to take a trip up to the Chandlers.

END_OF_DOCUMENT_TOKEN_TO_BE_REPLACED Here’s a cost breakdown of living as a single person on a narrowboat from what I gathered over the last 12 months.

Total cost for one year All in – (Fuel/Heating/Light/Gas and Electricity/Licence/Insurance) £1,982.19

I’m hearing this increasingly when I turn the radio. Stories of people heating cans of beans on their gas room heaters, food banks not being able to cope and people having to choose between electricity and food.

Can’t be sure whether it’s truly indicative of the state of play out there because this is the BBC (radio 4) we’re talking about, and they like to lay it on thick with the old bullsh1t.

What I do know, fact-wise, is that the cost of fuels have gone up by roughly 50% in the last 12 months.

This is not an insignificant amount. It’s affected all fuels across the sector and electricity prices have gone up also.

Since fitting the solar panels last winter, I’ve had basically too much electricity.

This has meant as summer approaches the level at which I use the electricity is FAR less than the amount the panels pump out.

In contrast, when I go to get gas from my local supplier in Banbury, they tell me the Calor wholesaller hasn’t been returning their calls for 9 weeks.

No-one on the industrial side of things has ANY Calor in Bunbury (13kg).

This does not bode well, and I fully expect in the full-ness of time, the supply shortage could leave me unable to do my cooking, currently on Gas, which would be a bit of a problem…..

If you’re given lemons. Make lemonade.

Fitting an 2000w inverter to my narrowboat

I’ve had the inverter for years….. Bought it before I left the marina. In the first 6 months in fact. It looks a bit like this –

I’ve used it to: Power the TV. Power the circular saw. Charge up computers and devices.

Basically, the heavier duty stuff that you can’t do on 12v.

END_OF_DOCUMENT_TOKEN_TO_BE_REPLACED

In comparison to Spiceball summer mooring, when it does indeed have all these things plus; banging and whistling all hours day and night from the factory opposite. Fine Lady bakery.

During the winter, moorers are allowed to remain on the 2 day mooring for 2 weeks!

This is away from the factory and actually bumps Spiceball Park up quite considerably in terms of livability. It’s even got a metalled pathway! You don’t need to get everything covered in mud when you get off the boat!

Here’s a picture of Spiceball Park.

The leaves, or lack of them means that solar energy is free. To a point.

END_OF_DOCUMENT_TOKEN_TO_BE_REPLACED

Had enough of Cropredy.

Benefits include: Being close to the pub. Only walking distance away.

Made up towpaths. Gravelled and civilised…..

Downsides: Crap signal. Doesn’t matter where you go, your signal is patchy to non-existant.

Car vandals. Went out in car, came back, parked it up. Came out again and found a scratch horizontally across the front bumper.

It was parked in a slight lay-by area, away from any traffic moving in that direction. It looks more like a screwdriver.

I can touch it up and make it go away before I sell it.

END_OF_DOCUMENT_TOKEN_TO_BE_REPLACED

So. A little move up.

Takes about an hour on the boat. Maybe a bit longer. 3 Locks to get through.

Is about the only stop on this circuit where the sounds of the motorway don’t provide the main audio backdrop to your canal mooring.

Cropredy is kind of a posh village, which hosts a blues festival in the summer called the ‘Fairport Convention‘.

The canal has a waterpoint, bins, sanitation and a turning point here.

There’s one shop that sells overpriced goods to unsuspecting boaters.

All things being said, it seems like a great place to moor, the only possible downside being the lack of mobile signal at many locations in the village.

In most of the locations in the village.

In fact, you have to go out of the village to get any coverage on Three, the network I’m on.

You can find it here.

END_OF_DOCUMENT_TOKEN_TO_BE_REPLACED 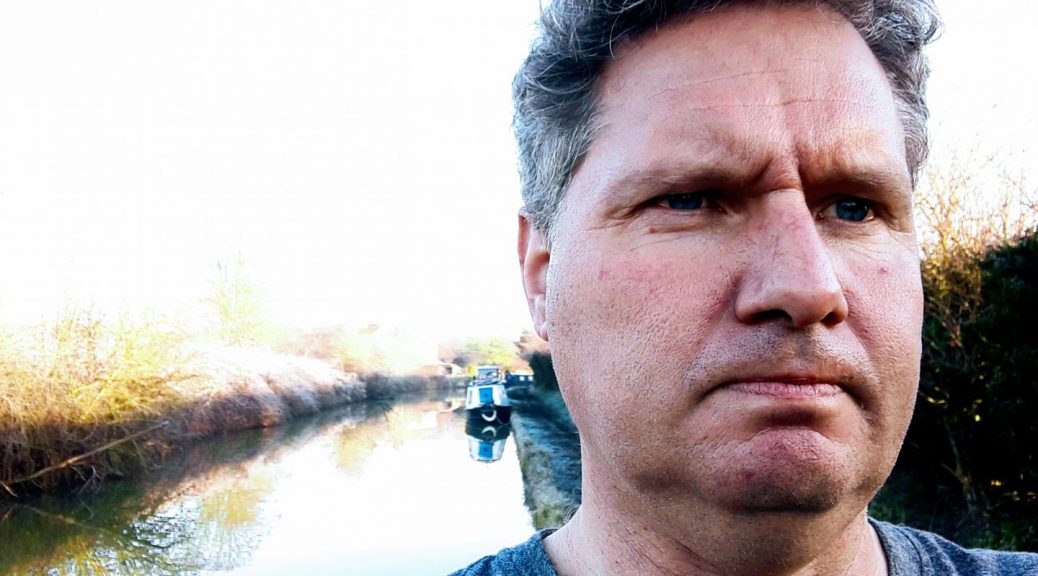 My winter workplace, Amazon is about 300m from where I am moored now…

It’s very muddy here, which is why I didn’t come down here when I was starting at Amazon just over the road.

Glad I didn’t. Negotiating the mud takes in cold wet etc. is difficult. 15 minutes in the car is easy.

Didn’t stay at Pig Place. I was in two minds when I arrived.

Walking at 4am in the morning. 5-7 minutes to the car. And back, just to stay outside the pig place.

Not really worth it….

After having my pins pulled out and my neighbour describing my boat passing his floating backwards down the canal made me think there may be better places to be.

So. Moved on down to Twyford Wharf, where I completed my (short) term of employment at Amazon.

Looks very much like any other factory without all the seasonal workers which were there for the Christmas period.

I appreciated my time there.

They sorted us out with free stuff. Pay was always on time. They even got a DJ in on Christmas Eve. Here’s a picture of him.

I was told it was a lot busier last year at around the Christmas period, but since then they’ve opened 2 new sorting centres to distribute their parcels. One is at Lutterworth (DBI7 Amazon), the other is Birmingham (Amazon DBI3).

These have taken away a lot of the capacity from DOX2 sortation operation.

Last year a couple of the co-workers described scenes of operatives confronting WALLS of parcels and having to adhere to 2m DISTANCING RULES.

Very different kettle of fish to this year.