FlyBe operate what they call a local network, basing their business model on cheap regular flights. An alternative to other modes of transport for scheduled travellers.

It was the first time I’d been on a FlyBe flight and I was impressed that I didn’t have to walk across the runway, you could pay with plastic, and you didn’t have to queue for boarding as seats were issued at check in. All advantages over the competition, Easyjet, Ryanair et. al.

It was one of the planes with propellors and having a window seat looking out I could watch the propellor spinning if I got bored, (bit like the washing machine only faster).

Would fly with them again, I think their prices could be lower though.

Thomsonfly operate a number of services from Cov. Spawn of a much larger fish Thomson (TUI), the service on board is much the same as you would expect from an large operator. The toilets were smelling a bit, but that disappeared when we got going.

Coventry airport is the preverbial shed in a field.
From airport, was directed to small village bus stop where I waited for an hour for a bus to Cov.

In summing up: The extent of local amenities was limited, but the price for the flight was under £40.
Like Ryanair, Thomsonfly have slashed their overheads. If you don’t mind a little extra travelling, or in my case waiting around, these are the flights for you.

Here is a summary of the costs you can expect to pay. I have used my experiences as an example, these are not always representative of truely the cheapest, you will always find cheaper if you want to work through all the options, but here we go:

Here is a map of nice where i have marked up all the best spots for your perusal. 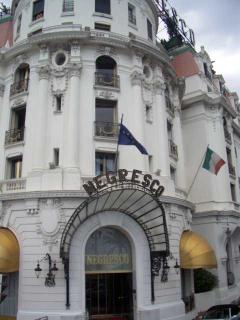