Having travelled the length and width of Egypt roughly 7,000km, I feel I’m in a position to give information on what I found to be the best and the worst hotels in Egypt.

Best hotel in Egypt
Iberhotel – Luxor: $100 per night. View over the Nile. 10 minute walk into town, what more could you ask for? 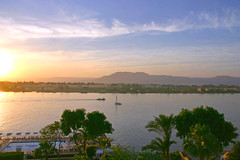 Shot of the Iberhotel Luxor

Worst hotel in Egypt
Hyatt – Cairo: $400 per night. Rude service. Domineering attitude. Made life difficult at every opportunity. A poor choice for any non-arab staying in Cairo. Am now in Aquaba Jordan after a slightly prolonged stay in Israel.

Got delayed which led to a late arrival at the Jordanian border, which is pretty close about 8KM from Egypt.

I was delayed and the border closed @ 8pm.

I had to wait till 6am the next morning on the benches outside the border crossing.

The border crossing itself was like something from the iron curtain; all landmine strips, watchtowers and dogs.

Made for a memorable crossing, got to wonder through Elat prime Israel resort, visit Herod’s or the King’s Resort a cultural head ducking for a Christian. The fact that the Jews celebrate this King who almost destroyed our King and Saviour as well as murdering a load of his own, innocent people in the process seems slightly alien, to say the least.

I’m sure many Christians would be outraged by the existence of a Herod’s, and is really not something to celebrate. Still, we’ll be back in Israel and we can delve into that deeper later.

Took this picture from outside the Monkeys bar Elat, on the promenade you can find top hotels, eateries, stalls with candy floss, designer goods, bits and pieces and lots of Jewish youths wandering around. Have to arrange a tour for tomorrow, to a site know as Wadi-rum, a geo-wonderland explored by camel incorporating some spectacular rock formations in desert climate which should be fun. I’m into my rocks.

Have spent the best part of today driving. Hurghada to Sharm el Sheik.

Gave some policemen a lift, thought they where flagging me down and they just jumped in.

So that’s my journey’s over, pretty much.

Tomorrow I take a taxi to Taba to prepare for a crossing into pastures new!

Tune in for the next edition.

To re-enforce my recently bourne skills, I’ve taken time out to come here to Hurghada Egypt’s second resort after Sharm-el-Sheik.

I witness some stunning fish and coral, but only manage one picture, of my dive buddy Iressa from Lebanon.

If you wish to check out diving at Hurghada, I can recommend the company, it’s located at the Marriott Red Sea resort, which is a good resort. So called because, surprisingly, all the statues are located in a valley.

It looks like the valley was created through a mixture of basalt/limestone erosion. The tour guide said it rains once every five years for about 20minutes, so any erosion here taking place because of the Nile or it’s flood activities.

For either reason, limestone hilletts have formed in a way you might imagine of hobbiton (the Shire) except in rock. In these little hobbit holes are tombs of dead Kings and Queens from many centuries ago.

Cameras are not allowed.

Hatsheput – Valley of the Queens

Dressed as a man for purposes of retaining the throne in co-horts with political powers in Egypt at the time who suggested that this would prolong her stay in power.

She took advise, and stayed on the throne for 22 years. Eventually her son Tut-Moses the third destroyed most of her temples and murdered her and ditched her body in the desert, although she does have one of the most impressive tombs on the East bank pictured below. Valley of the Kings

62 separate tomb discoveries where made here over time.

The tombs tunnel deep into the ground, those of Rameses the IV going down to 30 metres. It’s hot down there!

As I say, no pictures allowed.

This picture below gives some illustration to the colours/styles used in the tombs. Valley of the Nobles

The nobles are slightly different in that they explain how the nobles aspired to a life of plenty, represented by field of crops, fruit and animals, plenty of water, papyrus and other symbols which might make a Egyptian happy.

The tombs are smaller, as might befit a noble. Not as large as a high priest like the one used to bury Tut-ankamun.

Again, no photos. But the guys at the gate try to scam money out of you for extra photos, on the sly.

I tipped one guy for a wafter, but when people ask you to break the rules, things have a tendency of coming back to you.

If you’re going to break the rules, you should do so on your on steam, not because someone invites you to, so I always leave ‘secret’ or ‘special’ deals for some other mug. Valley of the nobles

If going to learn ANYTHING from the temples @ Luxor the West or East bank, again, you’re going to need to book a TOUR.

If you’re a single this means, you’ll have to visit THOMAS COOK, otherwise, take your pick. The other travel agents deal with 2 people and upwards.

I paid the following for tours with THOMAS COOK in Luxor:-

The Nile runs north to south. Tours are separated into East and West bank.

Both were built over a course of years, thousands of years, the majority of the action taking place 1,300 BC, when they built a harbour which could bring building materials directly.

The temples are decorated with hieroglyphics visible only to nobility and Kings or high priests who conducted daily rituals.
This kept the power focused at the top of the structure.

They say that the success of Egypt is down to the riddle of ‘The Riddle of Sphinx’ – Intelligence with power.

I’d advocate a certain amount comes from the sharing of knowledge.

You can find details of pretty much everything on these walls including booty from Tut-Moses III forays into Israel, rituals and ceremonies, to details of the kings their godly allegiances. It’s all recorded in thousands of hieroglyphics.

It would be safe to say Karnak is the more impressive of the two ruins. Here’s a couple of shots to give some identity to the place. Karnak – Temple of a Million Years If you want to take photos the best times are around mid day, (when the tours have gone), or at the sound and light festival when the uplights can provide a bit of contrast.

Or Thebes as it was known. A smaller set of ruins. Impressive with tall columns depicting scenes from the banks of the Nile.

By the time I reach this, I am deep in conversation with some amateur historians about what had made the Egyptian structure so successful. The main reason for their downfall was they spent to much money worshiping, the gods, themselves and whatnot.
We both agreed that 3,000 years was a good run.

The Romans have built a little temple at the edge of the original ruins. Dedicated to Christianity, it seems completely out of place in amongst the hieroglyphics.