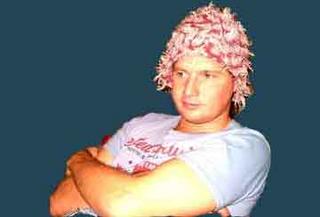 Watching Star Wars third episode tonight, will be moving on by TICA bus up toward Honduras tommorrow.

I have my ticket. My watch is set.

Don’t think Managua is the best place in the world, it has no commercial district, there are no department stores, you will have trouble finding a bank and what development has taken place is on an urban American Car orientated, decentralised multiple business district system making it useless for the tourist.

The Market
Managua does however have an outdoor market the size of Belgium.
You will get lost here if you are reading your Lonely Planet guide at the same time as trying to find your way around.

Here is a picture from the market.

This woman is cooking up some spicey arroz, vegetables and meat.

Other considerations
The people are friendly (don’t mention the war).

It is safer than Rio.

For those that don’t know, Nicaragua was George Bush snr’s Iraq of sorts.

He pervaded influence in the region sometime in the eightees and things have never been the same since.

Alone
When you walk around Managua there is evidence of the beginnings of something, grand structures, wide tree lined boulevards, totems, monuments etc. 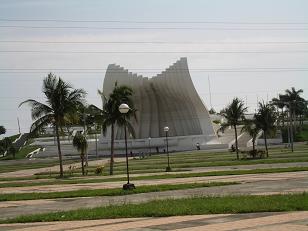 When I walked down here I was alone, completely, not a car, not a person in sight.

I imagine this was built as a symbol of the new Nicaragua, a Nicaragua which was never given the chance to develop.

US sponsored terrorism
Unlike Iraq, Nicaragua was a state where the US sponsored terror. Beheadings, ritual rape, food and water poisoning other general nastieness.
The US sponsored Contra Rebels never actually won a fight with the then Government troops and the battle was brought to the people, quite literally.

To Liverpool for winning in Europe, first UK team since 1999 and record breaking five time winners.

Have moved on to Costa Ricas northern Neighbour – Nicaragua.

Also moving a timezone and unexpected time calculations has meant that I have been allowed to spend an additional night in Nicaragua’s capital – Managua.

An unwanted blessing, after having change thrown in my face by one of the shopkeepers in the name of the Nicaraguan people.

Still, don’t let that put you off, it’s time for a wander round town.