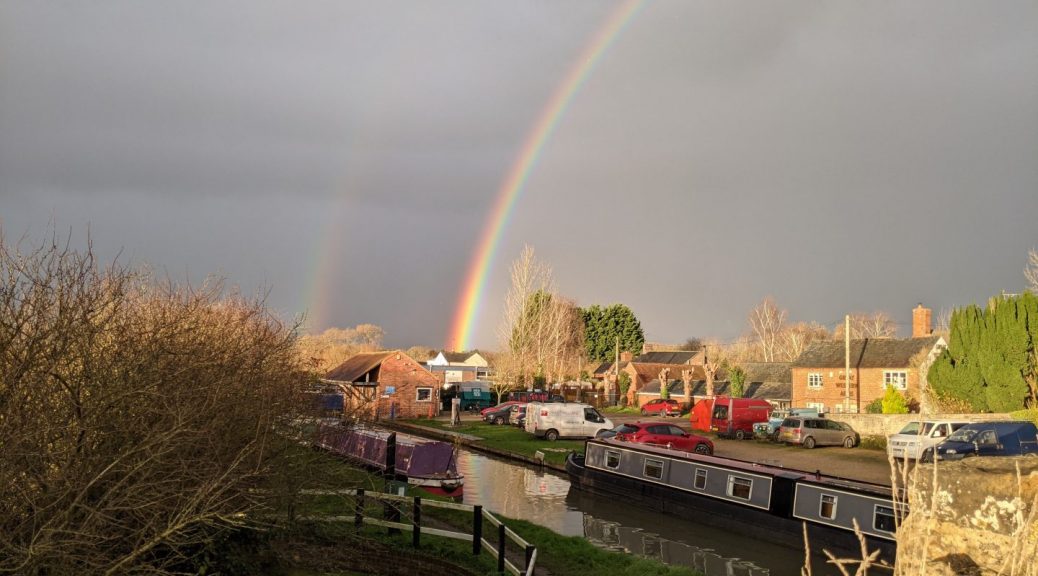 Spent 3 weeks at Aynho Wharf. Perhaps a week more than I should have, but it appears no-one is counting.

Anyhow, yesterday, I moved on.

Working in the warehouse that provides the parcels that make up the delivery routes I do for Amazon Flex.

It’s a 5am start, then 8 hours handling parcels and shipments bound for the Midlands area.

Not a lot to it: Sort parcels when they arrive off lorries and log them on the system. Group the parcels into routes. Issue routes to the delivery drivers. That’s basically what the day consists of.

That consists of £1,500 after the first 6 weeks, then another after 12 weeks has passed. So you have to stay for 3 months!

Not sure I’m going to do that, but 6 weeks takes me beyond the Christmas period.

Both of my pumps broke.

That’s a pump that brings cold water in, and a bilge pump that pumps dirty water out.

Both broke, or started causing problems as I was leaving London.

A life without pumps on a boat is a smelly dirty life.

No fresh water to wash and cook. No showering if you can’t pump the water away afterwards….

For this reason, I needed to get them fixed pretty quick.

END_OF_DOCUMENT_TOKEN_TO_BE_REPLACED

Had a beer to celebrate.

So that’s it for ‘Bonnie in London‘.

In the end, my return journey took me from Wednesday afternoon until Sunday night. 4 1/2 days.

I estimate that I saved

END_OF_DOCUMENT_TOKEN_TO_BE_REPLACED

So many engine problems.

I’m kind of glad I took Bonnie out on this long trip, now upwards of 200 miles, as it’s exacerbated problems which would have occurred anyhow over the winter period when I’m having to run the engine more to heat the boat etc….

As detailed yesterday, a lot of the oil was disappearing to destinations unknown.

Got up this morning and dipped the dipstick (?!), in the oil that is, and was shocked to see about 2mm of oil on the plunger.

A truly dangerous amount of oil to run an engine on.

Considering I’d poured over 1l of oil into the engine yesterday, it was time to diagnose and fix the source of this problem. That is, if I wanted to continue my journey without the engine blowing up. Or ceasing, as more be closer to the truth.

Sump pan on the boat is like a big tray that sits underneath the engine.

The idea is that it catches any of the potentially hazardous and polluting substances which drip out of engines.

It’s just like a metal box that sits under the engine.

I needed to empty it. It was about 1/3 full. Take all the liquids out.

Once I did this, I could see where the leaks were coming from.

Have a little pump that my mum and her husband, Michael bought me a few years ago.

It’s able to hand these noxious substances, ie. oil and water mixed, and I pumped it into a container and disposed of it.

Then I got the new oil and poured it in the filler cap.

Almost instantly, I could see the oil oozing out the side of the rocker cover (pictured).

That’s not supposed to happen.

END_OF_DOCUMENT_TOKEN_TO_BE_REPLACED

The same as last time, Days to Henley except this time I had:

All of those needed attention along the way.

Fuel ran out (nearly): Got up and after checking the engine, checked the fuel, which I had been meaning to do. I was lower than I thought. I had to get on my bike at 6.30am with my jerry can and pick up 10l from the local 24hour. It was clear diesel instead of red. Makes no difference except it costs 50% more.

2 Fuel leaks: leak #1;Had to stop and take off the fuel filter. Didn’t stop the problem had to stop and clean the threads off the fuel line. Leak #2; Didn’t see this until I’d repaired fuel leak #1. The injector fuel line was leaking and dropping fuel onto the heater plug. Cleaned off the threads and re-fitted. Problems went away.

Coolant Boiled Off: Stupidly, I took the top off the coolant manifold whilst I was working on the fuel lines. I don’t know why I did that, but it upset the pressure balance, and shortly after, all the coolant boiled off.

Luckily, I noticed the coolant was boiling off and I stopped the boat. Had to re-fill and bleed (twice). Problem went away.

Luckily I was able to pull in. That’s not always the case on the Thames. Sometimes you might have to go for miles. Not this time… Pulled in. Tried to tighten it up with a screwdriver, coolant still spurting… Got spanners out, tightened it up, proper tight. Spurting stopped. Problem solved.

Engine oil leaking or being used fast: Real fast, and this is a worrying. It’s using a lot of oil. I don’t know where this oil is going, but the lack of white smoke and otherwise healthy engine suggests it’s not making it into the fuel (through head gasket or piston rings). I don’t have time to drain the sump tray and analyse where this is coming from/going to. Problem not solved.

Rear prop shaft leaking: Had it re-packed 2 years ago. It’s dripping out and filling the engine bay at a slow but steady pace. This is a problem I can’t fix along the way.

So…. It’s been fun of that variety along the way.

Donned my lifejacket and did some night sailing along the Thames.

I won’t be doing that again.

Still, I’m here now, at Days Lock, cooking my dinner and looking forward to getting in my bed.

The weather is mild.

I’m hoping tomorrow will be my final day of sailing along the Thames.

Only the one piccy from the day and that’s heading up this post (Reading).

END_OF_DOCUMENT_TOKEN_TO_BE_REPLACED

Got some more pictures in….

Harry used to hole up here, a while back when he first got married to Meghan. It’s an estate house with a golf course behind Windsor castle.

The highland cattle peer out over the Thames from the raised concrete embankment.

It’s terraced avenue of oak trees lean out over the Thames, reflecting in the waters and dropping their leaves.

Rather a posh spot.

There’s lots of signs telling you not to moor up, it’s the Queen’s estate or whatever.

Apart from a 20 minute stop for lunch, and another 20 minutes having to manually operate the locks at Belvale, it’s been a full day of sailing.

END_OF_DOCUMENT_TOKEN_TO_BE_REPLACED

11.50 or so when I exited the lock at Brentford and began my journey back to my car and Oxfordshire.

The picture on the front is Richmond bridge.

If you remember, last time I came through, it was down.

Get to the point

I’m not doing any relaxing on this journey.

For that reason, there’ll be no morning update to the blog, just one in the evening.

Whichever is possible to navigate under.

5hrs and 50 minutes today – 20 miles. Tomorrow I intend to do roughly double that.

I’ve been at Brentford since Sunday.

I was expecting the odd boat to turn up, but so far none, and it’s now Wednesday morning.

Good job I booked my OWN passage this time.

I would have been sat here for a while… moored up on the Brent.

Here’s a picture of one of my neighbours.