Free software
Usually you have to pay, but this was free so why not?

The software took a couple of minutes to download.
I installed it on 11th Dec.

The following major effects were noticed over the course of it’s short, but eventful life:-

When I came back to work on Wednesday, I essentially didn’t have a computer to work with.
It’s taken me from then, the 18th, till now, the 4th, to fix the problem and install firewall and virus protection i.e wasted about 8 days.

If you’re tempted to download Norton 2008, don’t.
Or if you do, be prepared:
Here’s what you have to do to get rid of the stuff.

Uninstalling Symantec
The uninstaller failed.
After searching, Yahoo Search
I visited the Symantec site where they have an Symantec Unistaller tool for when things go wrong.
Downloaded this.
Failed.

Attempted to download and install Kapersky (internet software). Was told I had to uninstall Norton first.

I had no firewall to go surfing around the ‘net, pick up my emails or leave a broadband connection safetly.

Visited Cnet found this Revo uninstaller.
It identified the dynamic library and system entries which I had to go through and delete manually.

Norton 2008 In summary
For anyone running an older system, I dread to think. You’re looking at dial-up style frustration say from a 1999 machine.
Paper readingly boring boot times.

Apparently Norton now charges for help facility so that goes some way to explaining why this release is so diabolical.
As an IT professional, non-core software should sit in the background. Quietly.

Here’s my own take Antivirus Software.

£Free or £19.99
Pro’s: It’s free. Clean interface, easily navigable.
When I installed the paid version, it seemed to import all the Network Settings from Zone Alarm meaning I didn’t have to run the network set-up wizard on each computer or go round specifying individual IP addresses or ranges. An easy migration I think you’d call that.
The free version runs scheduled scans, something which Avast doesn’t do.
Con’s: After having run it for 2 months+ on two machines, free and paid versions.. none.
Installed: 2 Months
Download trial

£Free
Pro’s: It’s free. It’s fast.
Con’s: You’re going to need to be a bit of an expert. But I’m here to help you 🙂
a) To set up your home network.
You need to specify your Local IP Address and Subnet mask. You need to look at your Router>Setup> Internet settings retrieve the settings which should look something like this
Local IP Address 192.187.187.1
Subnet mask 255.255.255.0
and enter them in the Safe Zone manually.
Then it works just fine.
b) It offers a firewall and virus scanning software, none of the extra bits you may have become accustomed to twiddling around with.
Depending on whether the Internet is full of scary people out to get you OR you simply want a system protected from incoming threats decides whether you should choose this Anti-virus software.
As an IT Pro who spends every day on the ‘net, this software works just fine and is system friendly.
Installed: 5 days
Download trial

£29.00
Pro’s: Easily the quickest in terms of getting connected, getting it’s shit and sitting quietly in the corner (like a good Russian should).
Con’s: Took a while to identify viruses, you may have to move the scanners above the default level to flush the system out. The Kapersky gets high rankings for finding viruses on your system, so you should see this as a Pro as long as you set the levels right.
Set up the scans correctly and this will be the case.
Slight spectre of overiding security issues with Kapersky being located in the good old USSR.
Installed: 1 month
Download trial

£49.00
Pro’s: Spam filtering binned all the stuff I would have deleted myself.
Con’s: Compared with the other softwares here; slightly long boot times.
Scan’s: Scheduled scans seemed to take a decade, on Friday I seemed to be pulling my hair out then realised the system was on scan. At least on Norton you get the icon telling you there’s something happening, this doesn’t happen with F-Secure.
Installed: 1 month
Download trial

$33.00
Pro’s: Faster boot times than F-Secure.
Con’s: Needs a lot of work doing on the interface. Patience and manual dexterity are the name of the game if you want the software to work.
For example: If you have a persistent spam, you need to go into the message source and manually scoop that emailers address then paste it into AVG’s blocked senders list. This is the only way to block incoming emails without them entering your inbox.
Setting up a local network: Again, a cut and paste job. You’re going into the router, finding the IP range and subnet mask and adding them to your trusted networks.
I couldn’t achieve a two way connection even after fiddling round. Not ideal if you’re planning to share your workload between rooms, people or computers. If you plan to network, follow the steps in Zone Alarm…
Installed: 1 month
Download trial

Summary
Most of these software’s are either more complex and do less or don’t work as well on the things you really want, Avira/Zone Alarm work as well if not better than anything Norton has done in the past and steam ahead of the current release.
In terms of the Spam blocking, Norton still takes a lot of beating, F-Secure probably comes the closest in that respect.
Kapersky was good in that it was fast with high virus availability and lurked in the background with little problem. I hardly knew it was there.
Free software, I plumped for Zone Alarm and Avira. I can recommend it as the software which works to protect you from malicious threats on the Internet, Avira did a great job in mopping up, deleting spam and doing the weekly maintenance
Unlike Norton Antivirus 2008, none of these softwares stopped my computer working and crashed all my software then asked me to phone a helpline.
Shame on you Norton.

Every time I go down the shops things have gone up in price. Usually it’s bread. Week on week things seem to be rising.

Here are some figures that go some way in reflecting the real sizes and prices for everyday shop.

You can find the rest on The Telegraph website.

Called the hanging Church because it was once positioned over the gatehouse to the Coptic quarters.

The Coptic hanging church is the oldest church I have visited, dating back to the 7th century. Some parts of the church have been carbon dated, the most recent revealing first construction around 2nd century BC.
It’s clear this church has been around in some form for a very long time.

The courtyard and church have a distinctly Arabic feel with intricate wooden carvings, aprons and balconies. Hanging Church – The Inside

Unlike the Church of St. George, this one is entirely Coptic.

Inside you can find 110 icons dedicated to the Christian faith most of them dating back to the 18th Century some going back as far as the 8th century, it is said this church is one of the earliest examples of Basilica style architecture.

There are continuous tour groups moving through, although this does little to spoil the over-all atmosphere which is made in the upwards direction;

all make for a warmth of style in keeping with Arabic, European and Christian decorations and considerations.

A pleasure to be in and around.

Weblinks: The Hanging Church website – Find out more about the hanging church, history and visiting times.

Since arriving in Montenegro, most of my time has been spent looking for accommodation.

Early riser
Spoke to girl last night at Fisherman’s Cafe, who told me the season ends when October begins.

Spent last night in the Blue Star hotel. You might check them. They have 3 hotels in the Budva region. The Montenegro, The Blue Star and the Splendid.

Am in the Splendid at the moment. It is the only hotel I’ve stayed in to have piped TV in the bathroom, apart from Caesar’s Palace. Aside from that, it’s part of the group and I managed to check all three from the Blue Star.

I’ve marked the blue star on the map for your interest.

I took two rolls, one with harness the other immersed in bubble bath.

One of the main attractions and features of Rotorua and the area is the high level of geothermal activity.

On the same rift as White Island, mentioned earlier in this blog, Rotorua is renowned for it baths and geothermal formations.

No where can these be found in more glory than at the Wai-o-Tapo park.

Each morning there is a regular show at 10.15am.

Part of the range of attractions on offer around Rotorua, family owned, the lost village tells a story through a museum and guided tour, of how a village Te Wairoa and it’s notaries were either buried or managed to escape the eruptions of Tarawera in 1886. 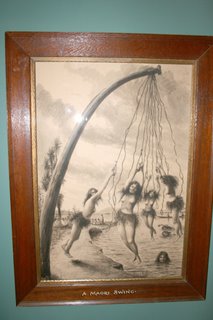 Te Wairoa
A point of departure for international tourists to take the pink and white terrace lakes, calciated lakes similar to that which can be found in Pummukale Turkey.

The main hotel was owned by a Scotsman, McRae, it was from here a local notary, Guide Sophie used to take parties up to the terraces.

Omen
Part of this included a trip across a lake Rotomahana.

Ten days before the eruption, crossing this lake, dog headed apparitions were spotted in in a Maori war canoe, none of which existed in the area.
The village elder who accurately predicted this was an omen of doom and bad things would follow.

Lost
Ten days later at 1am in the morning the village was buried and 150 of the residents had lost their lives.

Set in beautiful surroundings, including jungle, trout streams, waterfalls, interspersing the various bits of ruin and excavations along the way, this was a good way to spend the afternoon as the weather stayed good.