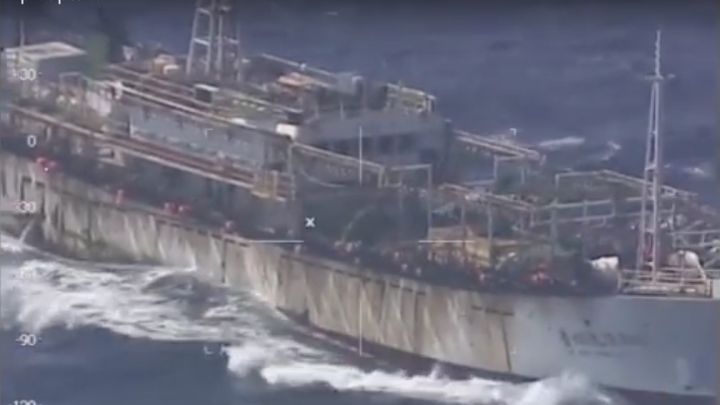 This occurred on Monday, it’s not being covered by the mainstream media.

Article below. (Taken from QZ)

On Monday (March 14) Argentina sank a Chinese-flagged trawler illegally fishing in its territorial waters. For recently elected president Mauricio Macri, the incident could shape relations with Beijing for years to come. His nation’s formidable coastguard released a statement (link in Spanish) on the incident yesterday (March 15), along with a video:

Coastguard radar detected the trawler off the coast of Puerto Madryn in the Chubut province, a zone known for squid. The coastguard said one of its vessels gave chase to the trawler, and tried without success to contact the crew by radio. It fired warning shots (shown on local news reports), but the Lu Yan Yuan Yu 010 then tried to “force a collision, putting at risk not only its own crew but coast guard personnel, who were then ordered to shoot parts of the vessel.”

The sinking took place about 907 miles (1,460 kilometers) south of Buenos Aires, in an area known to host the largest breeding population of Southern Right Whales starting in June.

It’s been 15 years since Argentina last sank a foreign vessel fishing illegally in its waters.

As Quartz has reported before, China has the world’s biggest and possibly most voracious distant-water fleet, which it heavily subsidizes. Last year the nonprofit Stop Illegal Fishing said the fleet had 2,000-plus vessels. This fleet regularly operates in other countries exclusive economic zones, territorial areas close to the shore where fish congregate.

China also backs its fleet diplomatically. China’s foreign ministry issued a statement after the incident urging Argentina “to carry out a full investigation immediately and to inform China of the details [and] to protect the safety and lawful rights of Chinese sailors.”

The ministry said four Chinese were picked up by the Argentines and 28 more were rescued by a nearby Chinese vessel. According to the Argentinian coastguard the four are being detained and will go before a federal judge in southern Chubut province.

Neither country needs a major diplomatic row on its hands. Marci’s center-right government only came to power last December. As for China, late last year it worked out a deal with the preceding administration in which it will finance and build two nuclear power plants in Argentina—a deal worth up to $15 billion.

Chinese Cyclist vs Innocent Laowai (me)