Painting topcoat on is the last step of our boat painting expedition.

We’ve reached that stage on most parts of the boat.

The important parts such as the gunwales and the cabin sides, have had two coats of undercoat, and have now received a topcoat.

Still, there are many parts of the boat that remain unpainted, even after 14 days in dock.

Here’s some pictures to show the state of progress so far.

Applying the topcoat came after a preparation time.

This is more the more undercoat you apply.

We used Rylard undercoat, which we found particularly gloopy. And, doing the preparation, the level of work to get rid of the brush strokes left by the undercoaters was high.

For the cabin sides, which had two coats of undercoat was approximately 10 hours, to get to a consistent, smooth finish.

For the cabin roof, which had one coat of undercoat was approximately 5 hours to get to a consistent smooth finish.

This will vary depending on the length of your boat.

5 hours per 50ft is a good estimate on how much time you should allocate on getting these surfaces to a workable pre-topcoat finish. 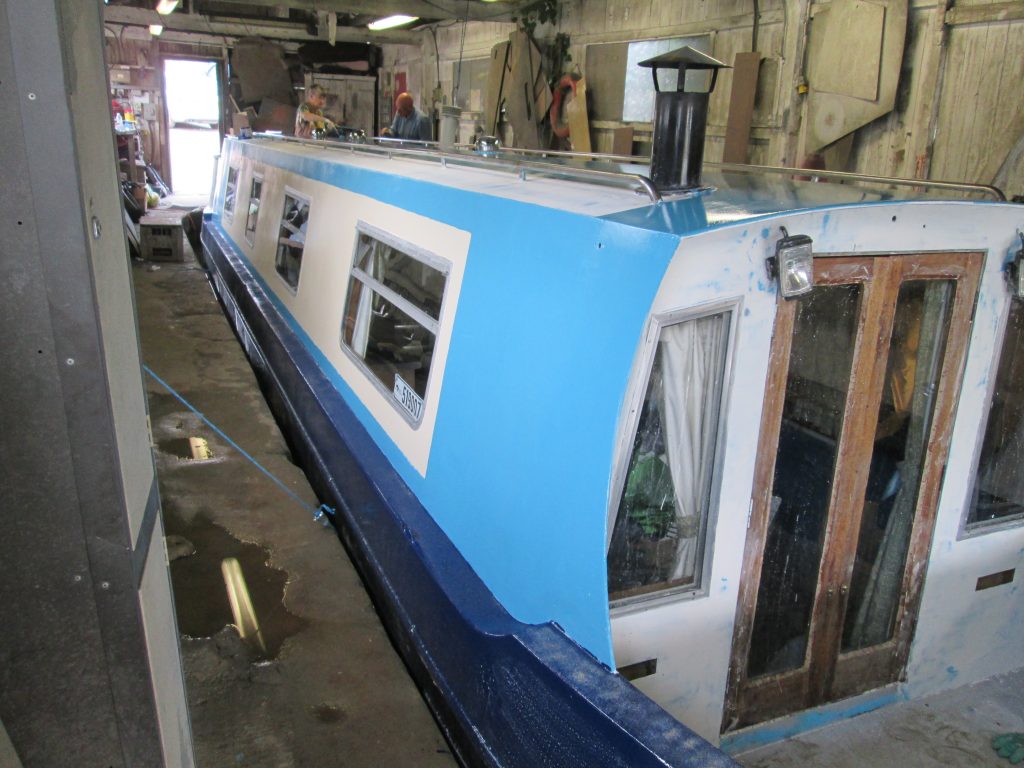 The tools I used was the orbital sander + wet and dry to get to the parts which the power tools could not reach.

After the sanding has been done, you’ve got to get all the excess dust off with a damp cloth.

Then have a rest!

Applying with 4″ roller. Laying off with 4″ brush.

We always aim to leave 16 hours topcoat drying time. All the coats we leave as long as possible, mostly because there are so many other jobs to do in the meantime!

Expect to be using plenty of cling-film, disposable gloves, clothes and kitchen paper to get the job done.

The best disposable gloves, by the way, are the co-op ones! Superdrug we couldn’t get to fit on anyone, not even the kids! What a joke!