Today took the $8 tour of Hue, as suggested by my hotel.

This took in 5 paid for sites, 2 free sites and a cruise down the perfume river.

The day started at 7.30am with a little breakfast, scrambled egg and a cup of tea.

The pink bus is calling us…

Shortly after 8am, a pink bus pulled up outside the hotel and beeped it’s horn. Looked something like this.

We were paying $8 for the tour, but the entrance fees work out a lot more.

Lunch was at the Stop and Go, which served various authentic Vietnamese dishes and prawn crackers.

Before we started in the morning, the guide took entrance fees for the mornings’ attractions. 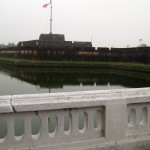 Hue was once the seat of the Vietnamese Imperial Crown and the mainstay of the city is the Old Citadel or Imperial Palace which resides overlooking the West bank of the Perfume river. 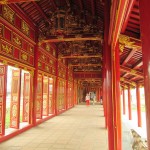 Vietnam was divided into north and south. During the centuries after the Chinese were turfed out, (C. 1400), feudal lords in the form of the Le’s and the Nguyen, with the help of the Dutch and Portuguese, ran the North and South of the country.

Hue was declared the administrative capital in 1805 and remained so until 1945. It was part of the Nguyen empire, who had sway of the central areas of Vietnam.

The palace itself is divided into 4 zones, spanning 4 square km. You should at least a morning here, wandering around the various buildings of state and displays, relics, gardens, residence’s, pavilions etc.

Within the complex, is the Fine Art’s Museum. Housed in the old residences of Emporar Khai Dinh, which is a pavillion with a garden and water-garden, there are examples of the more luxurious elements of the regime, including the Emperor and Queen’s official garb. 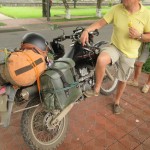 A little residence, once inhabited by one of the monarchy’s eunuchs. This is simply a house with a little garden, located a little way outside of the main city, it gives some insight into the way subjects lived.

We took about 40 mins here. Wandered around the garden, which was built on Feng Shui principles. Then re-boarded the bus to head toward our next destination.

An important religious site for the imperial monarchy, and still in operation today. Four elemental temples stand at the entrance, each housing a relic with inscriptions.

One houses a large bell. We’re told by our guide, that this is the second largest bell in Vietnam, and according to legend, can be heard from 12km away.

It continues to be a Buddhist site.

Very impressive, with great views of the Perfume river.

Lunch at Stop and Go – Hue

For a selection of Vietnamese and Western dishes.

The afternoon was spent visiting the tombs of dynastic kings. Each one was situated within it’s own complex consisting of pavilions, pagodas, temples and garden, each in a ‘feng shui’ layout.

The king’s location was never known, as the Vietnamese believed that were the site discovered by it’s enemies, the kings status in the afterlife would also be destroyed.

Located on a hill overlooking the river, perhaps the largest of the 3 tombs laid out to imitate the human body, with buildings indicating the head, torso and legs and the lake providing a feng shui reflection of the body.

The complex and the gardens are pretty extensive. Something like a stately home in the UK. Well kept, some parts working, some parts not.

Built on a mountain, this temple was mostly made up of steps. Each mezzanine adding a temple, residence, pavilion or pagoda to look down on the ones below.

Built for a king who had no offspring, which is unusual, because the other kings managed to have hundred’s. The kings had a large number of concubines, administrated by eunuchs. Up to 500, the king never having time to sleep with them all during the course of his lifetime.

Some where lucky enough to bear children, others just remained on the self for the duration of their lives.

The king had one wife. Tu Duc had smallpox when he was younger, and was unable to produce children.

This temple seems a little less extensive and a little more compact. Less spacious than the others. In terms of open spaces, it mostly seems to be filled with trees and jungle, although it is undergoing renovations and it may not stay this way.

Again, there’s a water feature, this time in the center, making up the main focus of the complex.

Little village sporting nick-nacks and incense sticks as well as other hand made souvenirs. Lot’s of bargaining to be had, some of the items better quality that others, but a bit of variety.

For the end of the night, we took the trip back to Hue on the perfume river. This was on one of the brightly coloured ‘dragon’ boats.

They served beer and refreshments.

By this time the sun had gone down and it was pretty cold.