Copying from drug crazed egalitarian tribes down in South America somewhere, AJ and his friend from Holland had an idea that this might be a good thing to do.
Working together with scientists from the local university, they developed a formula to make the first Bungy rope.

This was to string people from a local bridge.

Mad
Initially as the blurb will tell you no-one was interested in this ridiculous and frightening sport. And in the first year they only managed to find 28 people mad enough to do it.

Sales
Hackett developed the ‘Bungy Code of Practice’ to qualify and quantify this mad new pursuit.

Slowly, more and more normal punters came in, Hackett become the Bill Gates of Bungy and Bungy became the multimillion pound sport it is today. 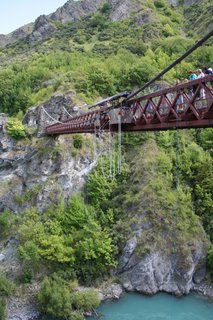 US under Martial Law – US Bailout