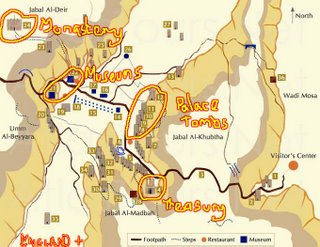 Here’s a map of Petra.

If you are visiting the site, I suggest you print this map out. They didn’t have any in English when I visited.

Here’s the best of the main sites from Petra, Jordan.

You’ve got refreshments along the way, so don’t worry too much about water.

Once 7 metres tall. Standing at the entrance caves to Al-siq. Name for the channel running through the mountain. Used to carry irrigation pipes and there is evidence of the Nabateans building and harnessing water through a number of dams as you pass through. Al-Khazneh or ‘the treasury’

Named the treasury as Bedouins believed there was ancient treasure buried in the urn’s which decorate adornments.

Bedouin settlers have routinely taken pot-shots at trying to release the treasure they believed was within. Although that was not possible,  the site is actually a tomb. A large number of tombs on the south-west face of the Siq mountain.

Probably the largest and most spectacular site in Petra when viewed from the opposite hill, the Palace Tombs are a tribute to the opulence of the nobles who built them.

Standing around 40-metres high they can be easily reached, and there are Bedouin stalls along the way to get refreshments, mint tea, sit down for five minutes. Passing the Amphitheatre, you’ll  reach this the colonnaded street. On the left you have the remains of a Greco-roman style walkway leads from the Amphitheatre up to the site of the Temple, currently being excavated by Browns university.

On the right is the old river with a number of channels leading into it.

At the base of the Colonnaded Street you have the museums and restaurants. If you want a cheap buffet, I recommend the Crown Plaza. KML

The Bedouins will try and sell you stuff. It’s up to you what you buy.

No Rocks for Mikey