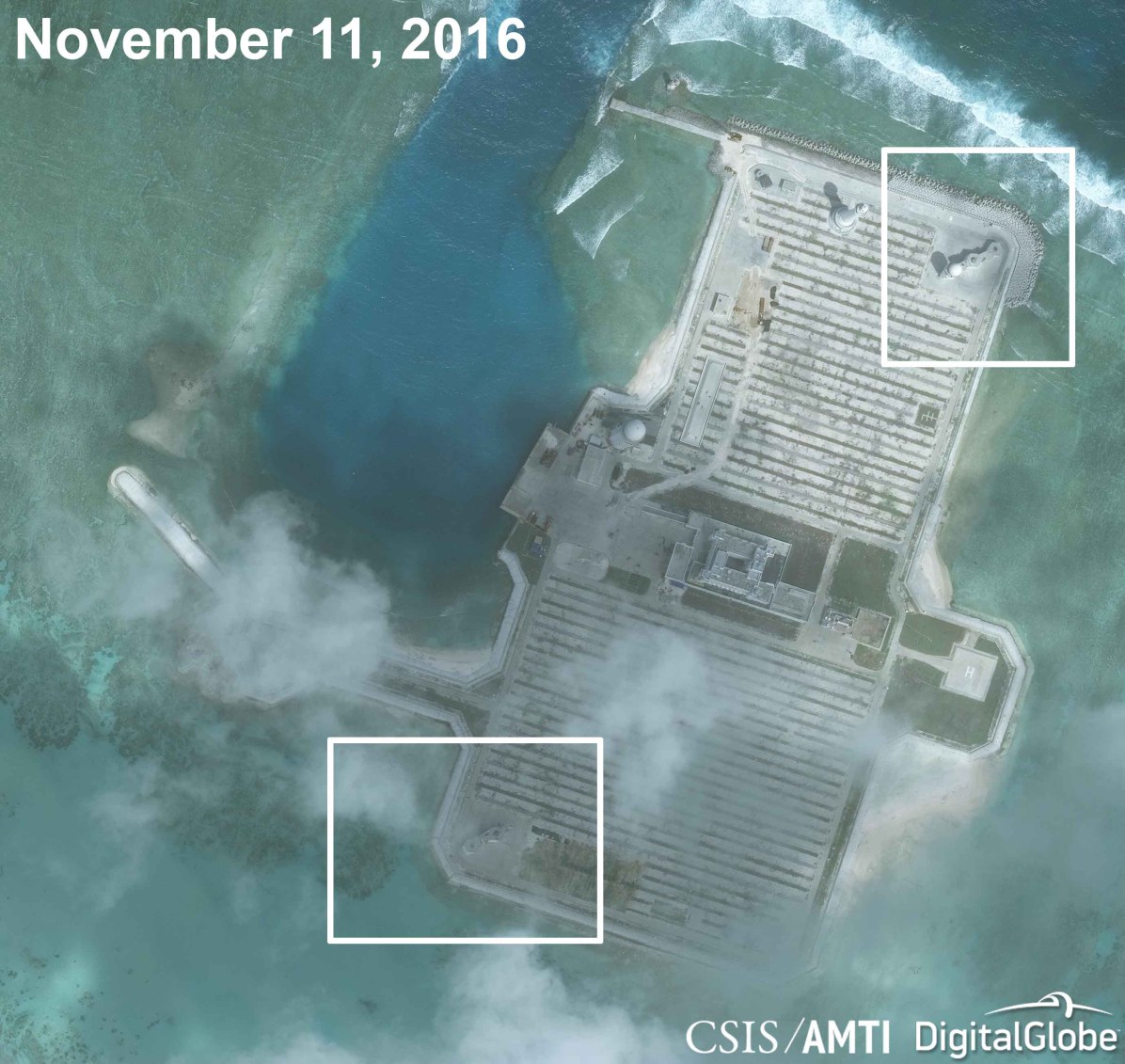 Just like they created the great wall of China in the 5th, 8th and 14th centuries, the only man made structure visible from space, so the Chinese have set about in this, the 21st century to create fortifications of a similar scale.

The land reclamation in the Spratlys represents the greatest structure created by man, and again, similar to the great wall, an engineering feat in defence of the the realm, this time not to keep out the Mongols to the North, but the United States’s professed ‘pivot to Asia‘.

Updated December 14th, 2016 – China appears to have installed weapons, including anti-aircraft and anti-missile systems, on all seven of the artificial islands it has built in the South China Sea. Pictures added below.

May 20th 2015: CNN decided to fly a plane along with the American military over a set of islands, known as the Spratly or Nansha Islands, located in the South China Sea.

Images show one of the greatest geo-forming feats in engineering history, the creation of up to six islands, along with airstrips and deep harbors, multistory buildings and runways, all in under 2 years.

Here’s a map of the islands China currently has it’s attention on.

The seven islands and developments:-

Update 14th December, 2016:
“Construction of all four structures has been completed at Fiery Cross Reef, where covers have been placed over the point defenses installed on the central hexagonal tower and the two in front of it. But the size of the platforms (which matches those at the four smaller artificial islands) and covers suggests they boast systems similar to those at Gaven, Hughes, Johnson, and Cuarteron Reefs.” 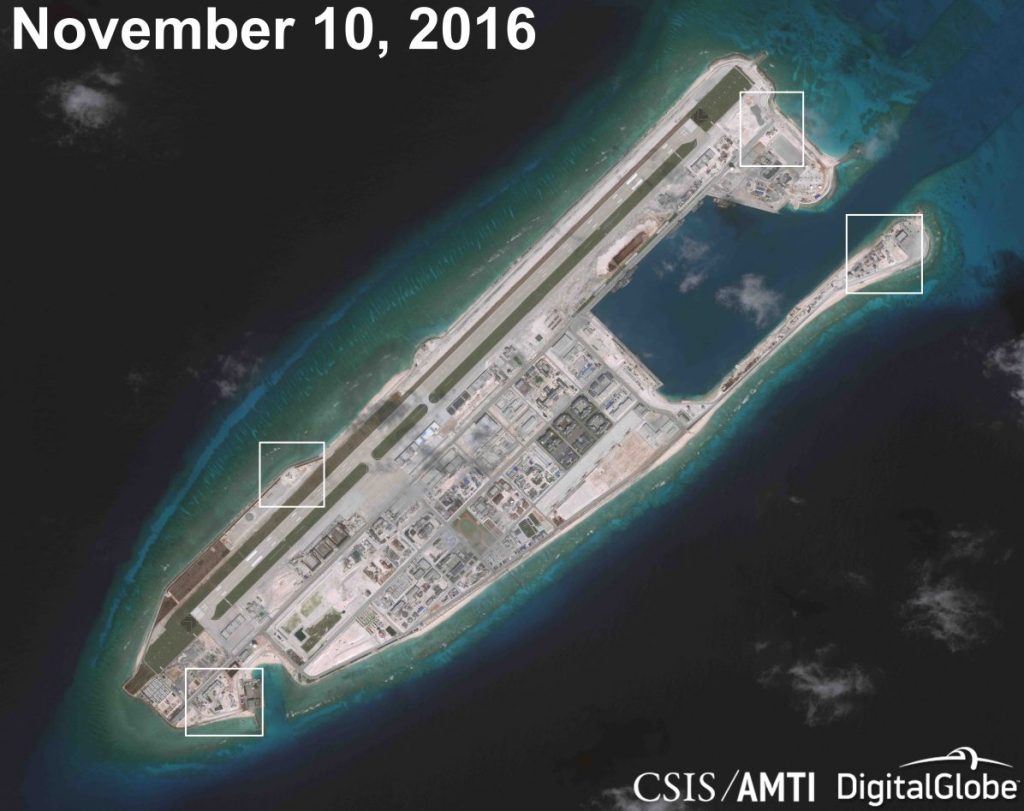 Update 14th December, 2016:
“China modified this blueprint for its facility on Johnson Reef. There the central facility has only two arms, with the southern one sporting the same anti-aircraft gun (which is covered by a tarp in recent imagery but was previously visible) and the northern one an apparent CIWS. Another gun and probable CIWS, along with a radar, were constructed on a separate structure, consisting of three hexagonal towers on the eastern side of the artificial island. This structure seems to be a less complex precursor to those built more recently at Fiery Cross, Mischief, and Subi Reefs.”

The following is based on a translation of a report in Chinese media:

The “On Military and War” column of news.ifeng.com published an article titled “Turning Mischief Reef into the Pearl Harbor of the South China Sea is of vital importance” on the advantages of the artificial island reclaimed there in serving as China’s forefront outpost in the South China Sea with an integrated air, sea and land garrison.

The article says that though the land reclamation at Fiery Cross Reef was completed on June 15, that at Mischief Reef has not.

So far only 5.6 of the planned 8 square km of land have been reclaimed as the reclamation began late in January this year.

The report says the atoll there is 9 km long and 6 km wide. The lagoon on the atoll has an area of 36 square km and a depth from 20 to 30 meters, deeper than Diego Garcia, the large military base of the UK and US in the Indian Ocean.

As the waves are only 1 metre high in the lagoon on the atoll when they are higher than 20 meters outside, the lagoon provides good shelter for large warships.

Moreover, the depth of the sea 1,000 meters away from the atoll rises sharply to more than 1,000 meters. It provides an ideal berth for submarines.

The report continues that all those advantages combined, the artificial island there can be an integrated land, sea and air base of as vital importance for China in the South China Sea as Pearl Harbor is for the United States in the Pacific. It is, therefore, more important than that at Fiery Cross Reef.

Update 14th December, 2016:
“At Mischief Reef, two of the four structures have been completed, with covers already placed over the systems installed there. Two others are still being finished, with disturbed soil showing where the three buried chambers were placed. One of those has covers over the front two platforms, while the other has space for a system that has not been installed yet. All three platforms at the fourth structure are empty, but it is clear from the spaces left empty on the platforms that the systems to be installed on the front two will be smaller than the one placed on the central platform. This is consistent with the pattern of larger anti-aircraft guns and probable CIWS seen on the smaller islets.“ 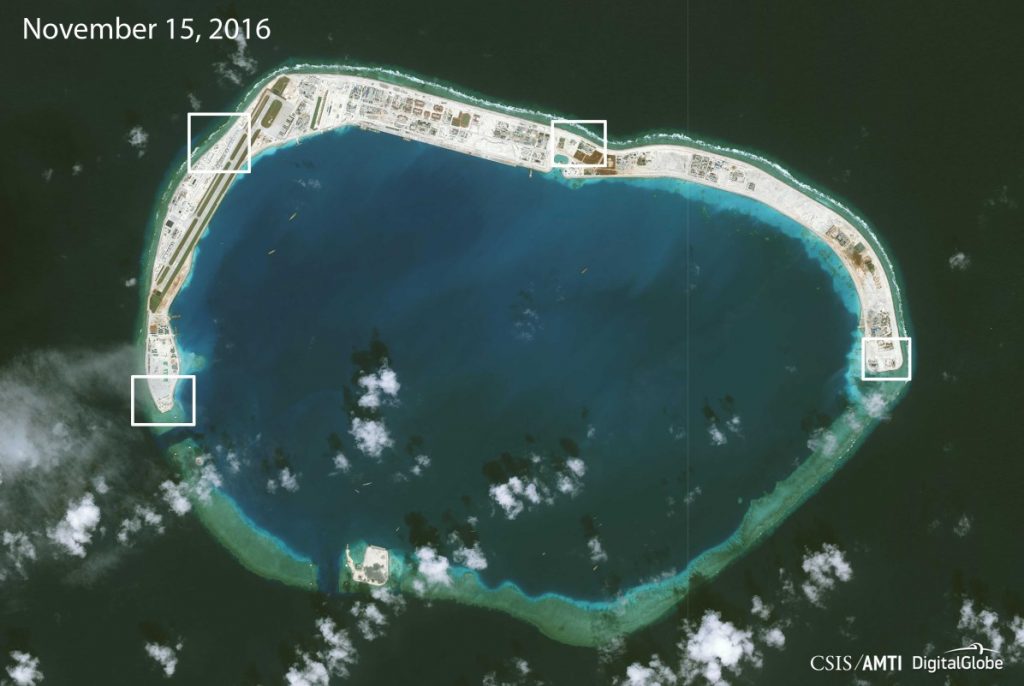 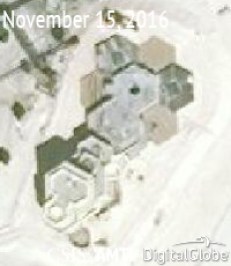 Update 14th December, 2016:
“At Subi Reef, only one of the four structures seems to have its point defences already installed, while the others sport empty spaces waiting for guns.

These gun and probable CIWS emplacements show that Beijing is serious about defence of its artificial islands in case of an armed contingency in the South China Sea. Among other things, they would be the last line of defence against cruise missiles launched by the United States or others against these soon-to-be-operational air bases. They would back up the defensive umbrella provided by a future deployment to the Spratlys of mobile surface-to-air missile (SAM) platforms, such as the HQ-9 deployed to Woody Island in the Paracel Islands. Such a deployment could happen at any time, and Fox News has reported that components for SAM systems have been spotted at the southeastern Chinese port of Jieyang, possibly destined for the South China Sea.”

Update 14th December, 2016:
“At Cuarteron Reef, the last of the four smaller artificial islands completed, the point-defense systems have been completely separated from the central headquarters building. The northeastern and southwestern ends of the islet each host a structure identical to the one built at Johnson, including an anti-aircraft gun, probable CIWS, and radar.

This model has gone through another evolution at China’s much-larger bases on Fiery Cross, Subi, and Mischief Reefs. Each of these sports four structures, consisting of tiered hexagonal towers oriented toward the sea. They are positioned so that any anti-aircraft guns and CIWS installations placed on them would cover all approaches to the base with overlapping fields of fire. Earlier AMTI imagery of the construction of these buildings showed that each included six hexagonal structures in a ring around a central tower. Since then, three of the outer hexagons have been buried, while the others have been built in a tiered pattern, with those in the front (facing outward), built lower than those behind. All of the structures except one at Fiery Cross are also backed by an even taller tower consisting of several terraces. These towers likely contain targeting radar and other systems necessary for the operation of advanced point defenses. The structure at Fiery Cross lacking this tower is built alongside the base’s runway and may be connected to radar and communications systems at the airport.” 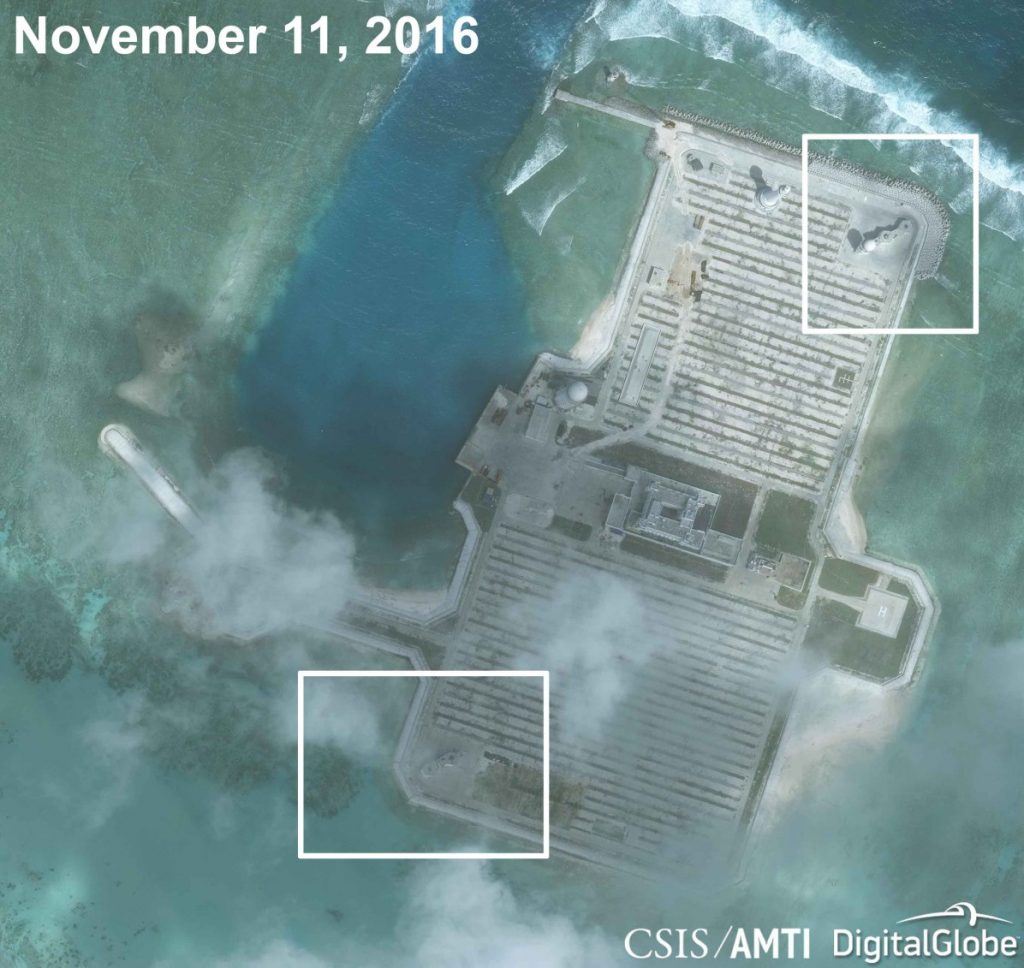 As you can see, the Chinese have been busy…

Initially just reef formations, the islands have been built up to strategic importance.

Land reclamation in the Spratlys

In the past, both the Phillipines and Vietnam have geo-formed and industrialised islands in the archipelago, but never has it drawn so much attention.

Perhaps it’s the scale and the speed. Maybe it’s the geopolitical climate.

The US’s ‘pivot to Asia’

Is it the US’s move to become the dominant force in the Asia Pacific, as this article indicates?

Having lived in China, I never got the impression from the Chinese media that the US was regarded as the dominant player in the region.

Why? Because, at present, it’s simply not the case. China is the big player in the neighborhood.

So much so, that in 2013, they decided to re-enforce that view, and announce an Air Defense Identification Zone, to add credence to the nine-dashes. This, they said, was ‘in line with international laws and protocols‘.

The US immediately said it would not recognise the ADIZ. Which, I believe, has led directly to the creation of these islands.

They are right at the southern end of the so called nine dashes line, and would be essential to defend it’s airspace, as China has stated it will do.

Spratly Islands. Before and after pictures: September 2015

China: Wisdom and leadership with a friendly face

Life behind the great firewall of China: VPN in China