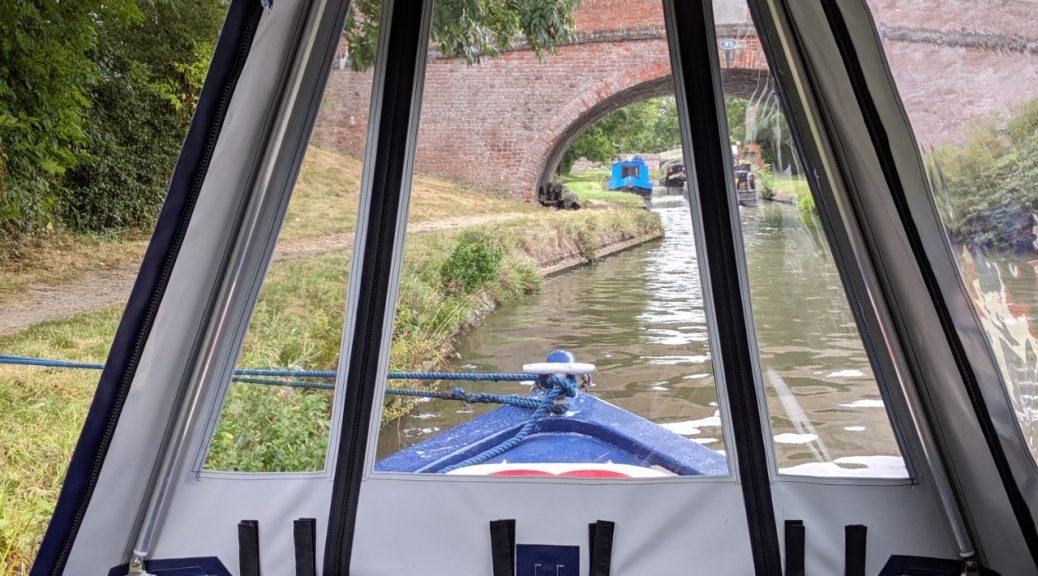 A Cratch Cover is like a pram cover for the front of a boat.

It covers the whole of the sunken bow area.

The reasons for fitting a cratch cover may be:-

I took advantage of the fact that Crick was only 6 miles down the road when the show was on in May to get an idea of the prices and companies that were offering these devises. £13.60 to get in.

I went there armed with this diagram giving a rough idea of the dimensions of the boat and what’s required.

After looking at the various quotes and companies, these were the ones I considered for having a Cratch Cover:

Canvasman: Based up North, around Leeds area. Had a look at my diagram and gave me a rough price at Crick, then sent me a more full quote by email some weeks later. The quality looked good but the price was too high.

Titan Boat Canopies: Chatted to at Crick. Seemed like a nice bunch. Gave a competitive price and a nice brochure. They were slightly further away and I’d heard that little bit less about them.

Kinver Canopies: Used to cycle through Kinver when I lived in Wolverhampton! See their covers quite a lot and seemed like a fun bunch when I visited them at Crick. They were able to give me an exact price based on the measurements. Kinver is not far from Rugby and the price was the best! Easy choice…

A few weeks after the Crick Show, we were in a position to make a decision. We went with Kinver Canopies.

Whilst I was at the show, I garnered that cratch fitting had fairly long lead times.

That would be the time from placing the order until getting the cover fitted.

With Kinver canopies, the lead in time was from a 12th June order, to the 6th September for installation, with a ‘fitting’ in between.

The order had to be made online. I was instructed that this was the best way to pass the information.

Shortly after the order, maybe a day or so, I got an email back confirming the order.

After a week or so of not hearing anything more, I rang up to find out what was going on with the order. I was told that it was in the system and that the next step was to come over and do the measurements, or the ‘fitting’ as they call it. They said this would take a few weeks, but I was ‘in the queue’.

This took place on the 12th August.

After the fitting, I was left with this frame.

Hard wearing plastic was draped over this frame and measurements were made in the proforma of the cover itself.

Took about an hour or so… Had to angle grind the TV aerial pole-base off the roof to make way for the center joist!

Once the frame was secured and the plastic had been marked and cut, it was on to the next phase, the manufacture.

I was told it would take about 4 weeks to get the cover made up.

On Tuesday, I got a phonecall informing me that the cover was ready and ready to be fitted.

It was a simple case of returning to Braunston, where the fitting had taken place, as it happened….

This morning Harry, I think his name was, turned up at around 10am with his box of spanners, drills and fittings.

By around 11am this morning, I was the happy owner of a brand spanking new cratch cover…

They left me with the plans, just in-case….

I was told that the seams sometimes leak whilst the thread expands and that rubbing some boot dubbing on it should sort it out.

I was also supposed to get some moss/algae guard to wash it with, but they forgot this and would be bringing it next time they were down this way. Maybe within the next week.

We’ll see how it lasts.

On to the next job….

Fastening fairleads to my boat pt1