Hired a motorbike and made the 12km journey to Phnom Pehn’s most famous attraction, the killing fields, or Cheung Ek, as the village is known.

They give you an audio guide when you arrive, which takes you around 22 sites.

It’s made by a survivor of the regime, who was imprisoned on the camp and witnessed many of the atrocities first hand.

Without the guide, it’s just a dusty, bumpy field, with a few sheds.

Like all good dictators, Pol Pot had his fair share of little phrases, or mantras to inspire his followers.

“Better to risk killing an innocent, than risk an enemy living.”

“To destroy you is no loss, to preserve you is no gain.”

Wandering the fields gave you a taste how this was inspired, followed by the reality of fear and shock, if you dared to cross the regime.

It’s difficult to see where the lines where drawn between innocence and guilt, keeping the populace in a state of general fear and confusion.

Something which Pol Pot seems to have achieved fairly well, and Cambodia still seems to be recovering from

This tree is where they smashed the heads of babies. (Men and women were kept separately, only babies were left with their mothers).

17,000 Civilians were killed here to ensure the rise and stability of the dictatorship. 8,000 of the bodies remain on site.

In 1979, the Pol Pot government collapsed after the Cambodia-Vietnam war, and Pol Pot fled to the border of Thailand. Spending the remains of his life under house arrest. 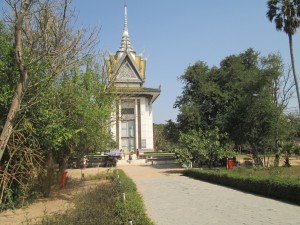 The stupa in the center of the complex has 17 floors to commemorate the victims.

Sihanoukville to Phnom Penh – By motorbike