Irish guy has taken it upon himself to make a stand.

In this case, it’s in the name of the male of the species, beneath the Eros statue in Piccadilly Circus, at 9pm on a Saturday night.

His stand is against the female of the species, who he stands and harasses for approximately 2 minutes before he receives a shock from onlooker female, who may the girl’s friend.

Back in China: This Chinese girl is on the Shanghai metro, being tailed by other Chinese girls, who you can hear giggling at her actions towards the male passengers on the train.

Word is, she split up with her boyfriend, who has lama genes.

Now she’s missing him and has taken it to the men on the metro, looking for another lama-type to hook up with.

This is the best way she knows.

The Chinese love a good spit anyhow, this one has just found an excuse, in her eyes. I’m not sure about the other passengers on the train…

No need to roll out the red carpet, these aren’t the best actors, but they do try.

If anyone has ever tried smashing a windscreen with parts of their body, they’ll know how hard it is… 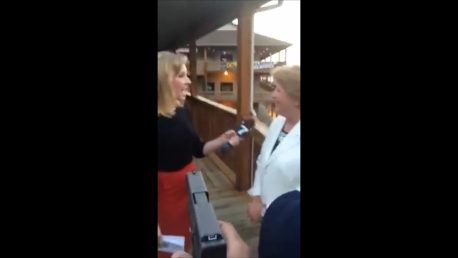 They keep starting up these wars and tirades against ‘enemies of the United States‘.

Seems they have enough crazies home-grown to satiate the appetite of any anti US proponent.

They can just sit back and watch the nation tear itself apart.

Reporter Vester Lee Flanaga, guns down 2 of his fellow employees after claiming they are white supremacists.

This is live and graphic footage.

After the spate of recent accidents in the past few weeks.

The case of the American – James Young killed when he tried to recover his mobile phone from the path of an oncoming rollercoaster.

That coming on the heals of the French slingshot ride at Luna Park, known as the reverse bungy which bungied itself into the scaffolding of the supporting scaffolding.

I really am not surprised.

These rides are really so dangerous, in fact crazy.

You need your head read to go on them.

What drives people to do crazy shit?

What drives people to do crazy shit whilst people sit around and do nothing? Or not get involved at all?

These two examples seem fairly relaxed. People go along with being; kicked punched, verbally and physically assaulted and do nothing, or if anything like the last video, actually join in.

Crazy guy on a train.

Letting loose on the China commuters….

Shakes a guys hand, who he proceeds to call his ‘friend’. He says the other people are ‘not good’ whilst calling them pigs and worms in English.

Lone girl gets beaten in McDonald’s.

Whilst the whole of McDonald’s watches.

About the girl that carried out the assault, she has a record as long as your arm. Including:-

You can read more about this girl here (New York Daily News). Her name is Aniah Ferguson, she is 16.

Russia has threatened to use “nuclear force” to defend its annexation of Crimea and warned that the “same conditions” that prompted it to take military action in Ukraine exist in the three Baltic states, all members of Nato.

According to notes made by an American at a meeting between Russian generals and US officials – and seen by The Timesnewspaper – Moscow threatened a “spectrum of responses from nuclear to non-military” if Nato moved more forces into Lithuania, Latvia and Estonia.

The Russians told the meeting, which took place in Germany last month, that an attempt to return Crimea to Ukraine would be met “forcefully including through the use of nuclear force”.

And they said if Nato sent arms to Ukraine this would be seen as “further encroachment by Nato to the Russian border” and “the Russian people would demand a forceful response”.
END_OF_DOCUMENT_TOKEN_TO_BE_REPLACED

Just picked up this little story from the web.

Childhood can be a precarious place, as we all know. It’s important to choose those role models for (our) children.

In Poland, they have identified some downfalls of the seemingly harmless, and now with Disney, faintly ubiqituous, Pooh bear.

Apparently, Pooh’s shortcomings when discussed by committee of local nimbies in Tuszyn town in Poland raised some concerns because he just wasn’t macho enough.

Winnie the Pooh banned from Polish playground for being ‘inappropriate hermaphrodite’ – News – Books – The Independent.

SARS H5N1 variant duck scoops for innocent women and children in the bay of Hong Kong!