Here’s a picture of my ‘main’ World of Warcraft char, Fatweh.

Now support a Facebook app updating the status of your chosen chars.

Tried it this morning and it didn’t work.

This does work. It’s a flash ani of my main an Allaince Warlock called Fatweh.

This is done using XML.
Flash allows you to complete the loop providing specified data on the fly updated directly from the XML feed based on my character. So, for example if the image relating to my cloak changed, the XML Namespace containing the image data and dependancies for that particular piece of kit would be changed dynamically through Flash. All done throught the XML publishing platform.

For many people Disconnect is a major problem in Warcraft. DC interrupts at random, and often crucial moments of play.
‘Oh I DC’ed’ being is a common, lame, excuse for players who die in inexcusable circumstances.

Don’t be a lamer!
Up until 2008 I used Norton Antivirus. A product I had used since my first computer in 1997. A ten year stint which came to an abrupt end following the 2008 suite.

To reduce in-game DC in Warcraft
I suggest removing your Norton product and replacing it with a comprehensive, industry respected firewall product. This will reduce your levels of DC by ensuring your ports are accessed by services only sanctioned by yourself.

I used the IP addresses supplied by the software to reverse trace the following companies:-

These are large national telecommunications companies, contributing an additional 8 connections through MY broadband wire.
Placing that additional strain on my games’ connection won’t be contributing to play in a positive way, and it’s not something I’ve asked for..

I rarely suffer from DC
I’m glad my software blocked these access attempts.

I rarely suffer from DC and would point you in the direction of Zone Alarm, the best gaming firewall at an affordable price.

In additional clicks the company, one of my favourite world-wide hoteliers, tells us.

A conversational blog by it’s founder and CEO Bill Marriott ranks amongst a list of 15 blogs (by sitepoint) where the corporate’s have got it right.

Here’s a picture from my favourite Marriott, Marriott Jordan Valley. Cheap, and great breakfast, I’d recommend it to those visiting the ruins who can’t get bookings at the Movenpick (founded by relatives of the Swiss Explorer who discovered the ruins and in the ideal situation).

Free software
Usually you have to pay, but this was free so why not?

The software took a couple of minutes to download.
I installed it on 11th Dec.

The following major effects were noticed over the course of it’s short, but eventful life:-

When I came back to work on Wednesday, I essentially didn’t have a computer to work with.
It’s taken me from then, the 18th, till now, the 4th, to fix the problem and install firewall and virus protection i.e wasted about 8 days.

If you’re tempted to download Norton 2008, don’t.
Or if you do, be prepared:
Here’s what you have to do to get rid of the stuff.

Uninstalling Symantec
The uninstaller failed.
After searching, Yahoo Search
I visited the Symantec site where they have an Symantec Unistaller tool for when things go wrong.
Downloaded this.
Failed.

Attempted to download and install Kapersky (internet software). Was told I had to uninstall Norton first.

I had no firewall to go surfing around the ‘net, pick up my emails or leave a broadband connection safetly.

Visited Cnet found this Revo uninstaller.
It identified the dynamic library and system entries which I had to go through and delete manually.

Norton 2008 In summary
For anyone running an older system, I dread to think. You’re looking at dial-up style frustration say from a 1999 machine.
Paper readingly boring boot times.

Apparently Norton now charges for help facility so that goes some way to explaining why this release is so diabolical.
As an IT professional, non-core software should sit in the background. Quietly.

Here’s my own take Antivirus Software.

£Free or £19.99
Pro’s: It’s free. Clean interface, easily navigable.
When I installed the paid version, it seemed to import all the Network Settings from Zone Alarm meaning I didn’t have to run the network set-up wizard on each computer or go round specifying individual IP addresses or ranges. An easy migration I think you’d call that.
The free version runs scheduled scans, something which Avast doesn’t do.
Con’s: After having run it for 2 months+ on two machines, free and paid versions.. none.
Installed: 2 Months
Download trial

£Free
Pro’s: It’s free. It’s fast.
Con’s: You’re going to need to be a bit of an expert. But I’m here to help you 🙂
a) To set up your home network.
You need to specify your Local IP Address and Subnet mask. You need to look at your Router>Setup> Internet settings retrieve the settings which should look something like this
Local IP Address 192.187.187.1
Subnet mask 255.255.255.0
and enter them in the Safe Zone manually.
Then it works just fine.
b) It offers a firewall and virus scanning software, none of the extra bits you may have become accustomed to twiddling around with.
Depending on whether the Internet is full of scary people out to get you OR you simply want a system protected from incoming threats decides whether you should choose this Anti-virus software.
As an IT Pro who spends every day on the ‘net, this software works just fine and is system friendly.
Installed: 5 days
Download trial

£29.00
Pro’s: Easily the quickest in terms of getting connected, getting it’s shit and sitting quietly in the corner (like a good Russian should).
Con’s: Took a while to identify viruses, you may have to move the scanners above the default level to flush the system out. The Kapersky gets high rankings for finding viruses on your system, so you should see this as a Pro as long as you set the levels right.
Set up the scans correctly and this will be the case.
Slight spectre of overiding security issues with Kapersky being located in the good old USSR.
Installed: 1 month
Download trial

£49.00
Pro’s: Spam filtering binned all the stuff I would have deleted myself.
Con’s: Compared with the other softwares here; slightly long boot times.
Scan’s: Scheduled scans seemed to take a decade, on Friday I seemed to be pulling my hair out then realised the system was on scan. At least on Norton you get the icon telling you there’s something happening, this doesn’t happen with F-Secure.
Installed: 1 month
Download trial

$33.00
Pro’s: Faster boot times than F-Secure.
Con’s: Needs a lot of work doing on the interface. Patience and manual dexterity are the name of the game if you want the software to work.
For example: If you have a persistent spam, you need to go into the message source and manually scoop that emailers address then paste it into AVG’s blocked senders list. This is the only way to block incoming emails without them entering your inbox.
Setting up a local network: Again, a cut and paste job. You’re going into the router, finding the IP range and subnet mask and adding them to your trusted networks.
I couldn’t achieve a two way connection even after fiddling round. Not ideal if you’re planning to share your workload between rooms, people or computers. If you plan to network, follow the steps in Zone Alarm…
Installed: 1 month
Download trial

Summary
Most of these software’s are either more complex and do less or don’t work as well on the things you really want, Avira/Zone Alarm work as well if not better than anything Norton has done in the past and steam ahead of the current release.
In terms of the Spam blocking, Norton still takes a lot of beating, F-Secure probably comes the closest in that respect.
Kapersky was good in that it was fast with high virus availability and lurked in the background with little problem. I hardly knew it was there.
Free software, I plumped for Zone Alarm and Avira. I can recommend it as the software which works to protect you from malicious threats on the Internet, Avira did a great job in mopping up, deleting spam and doing the weekly maintenance
Unlike Norton Antivirus 2008, none of these softwares stopped my computer working and crashed all my software then asked me to phone a helpline.
Shame on you Norton.

Part of keeping stylesheets up-to-date involves searching through the styles and removing them which have expired with no further use, previously involving a print out of the stylesheet, highlight pen and a copy of your source code.

A boring but essential part of everyday programming.

This Firefox plug-in is free and will remove all those redundant styles without the boring but necessary job of going through yourself.

5 Plugs in I use every day.

Flag Fox: Little icon sitting in the bottom right of the browser.

Tells you what country the site is located in . Clicking brings up more details such as IP address, WhoIs details. 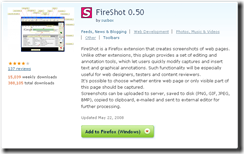 Fireshot: One of a number of screenshot programs.

Doesn’t cause stability issues and does what it says on the tin.

Any major design consideration can be checked in the tools section of this handy little add on.

Del.icous: Bookmark socially with this add-on.

Released on Tuesday 16th June Firefox 3 will be the most downloaded program on the ‘net within a 24 hour period.

I wonder what the odds on that are.