Where my journey finished.

I would’ve liked to have done more, but the MOT ran out on my car two days ago. That took priority over visiting the other places like Swansea and Cardiff I would have liked to dropped in.

Still there we are…

Photo’s from the trip https://photos.app.goo.gl/mSjTezCFFyNjw2tw6

I dug up the Google review which set me off on this place.

Charming and unique B&B, hosts were lovely and un-intrusive. Pretty sure the room we stayed in was haunted, as during the night kept getting disturbed by a figure standing near to the window and strange wet patch that appeared on the chair despite me and my partner not moving it through the duration of our stay, nor did we use the tea or coffee facilities (which were amply stocked with high quality goods), nor did we place any cups of water or drink near the dresser in question. Overall enthralling visit!! Would stay again:)

As promised. Here’s a video of the haunted house. Check the blue ‘orbs’ at around 2:14. I make a couple of errors whilst describing this video. I’d had a bit of a long day.

Last stop in Wales to pick up the car and back home.

END_OF_DOCUMENT_TOKEN_TO_BE_REPLACED

And the Montgomery canal. Which I travelled along for a period.

No boats on it…

This empty lock is the upper reaches of the canal about 2 miles outside of Newtown.

As you travel further down, it gradually starts filling with water until you reach the first working lock outside of Aberbechan.

It’s maintained by the Canal and River Trust pretty much as soon as it starts filling up with water.

Was much warmer today. Some places in the UK hit 30 +.

The day started very cloudy in Builth Wells, cold and overcast. Which is fine. Slowly, the sun burnt the cloud down, just leaving some resting in the valleys.

This was taken about 10am.

Things got hotter from then on in…

It was one long ascent to a peak of around 1,100ft just outside Newtown, then a drop with 6 miles into Newtown and the Severn Valley.

Newtown had this nice church, perhaps the best church I’ve seen since being in Wales.

They’re not big on their churches these Welsh. Most tend to be small, understated affairs. This one has done quite well.

Had some lunch in Newtown. Tesco meal deal and ate it in the park.

From here on in cycled down a combination of the Severn Valley Way, and the Montgomery Canal towpath until I reached Montgomery.

Managed to stay in the shade for most of the journey, which was a nice touch.

Their Feng Shui consultant appears to have been Aleister Crowley.

Everything arranged in a way so as to give an ‘off center’ or skewed feel. It’s like you look at things, they don’t feel right, then you think it’s your fault and they look nice really.

They don’t. They look weird and out of place.

One of the reviews on Booking.com said the place was haunted.

It’s an extreme rarity that I’m ever woken by my dreams, but at this place I woke at 2.33am in a dream I was performing with some Black Lives Matter people on stage, and a jay flew squawking into my face. Like crashed into me. Sat bolt upright.

Got cold chills down my spine for hours after. Strange thoughts interrupted my sleep. The channels on the TV stopped working at around 3.30am, and the screen went blue.

Luckily my phone radio streamed through the internet which provided enough distraction to give me a nights sleep.

I’m someone who needs a little noise, or I don’t find it possible to sleep.

I’ve made a video of the house. Hopefully I’ll put it on here, but at the moment, it’s not uploading, so for now it will have to wait.

Went for an overpriced meal in Montgomery.

It’s more like an English town in design, with that familiar mercantile, tobacco trader layout and feel to it, but on a much smaller scale. 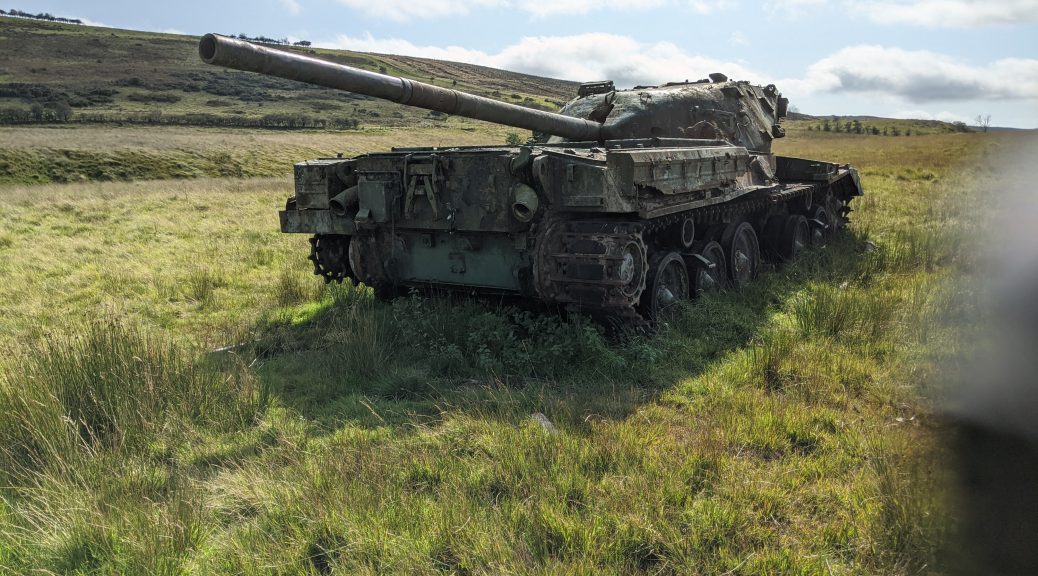 END_OF_DOCUMENT_TOKEN_TO_BE_REPLACED

Another easy day. Being the weekend, I wanted to have a look around Camarthen rather than just shoot through for a much harder, longer journey.

That’s not really a holiday.

So here I am in Camarthen. Only took one picture on the way down.

Speed was up. Did more miles today in 1 1/2 hours less, time-wise. Just shows what a waste of time yesterday was.

Here’s a picture of my bike. Maybe you can see what’s slowing it down.

END_OF_DOCUMENT_TOKEN_TO_BE_REPLACED

Thought about cycling to St. David‘s on the Pembrokeshire peninsular.

After reviewing prevailing weather conditions on the METoffice app, and knowing that Google said it added 3 1/2 hours to the 3 to get to Milford Sound. When the time came to set off, I set the destination for Milford.

This was without doubt the best decision of the day and I felt thankful for making it as I climbed and descended hills into 28mph headwinds.

The journey to Milford Sound

It took 4.5 hours. I really can’t say I enjoyed any of it. I just wanted to be in Milford, off my bike and out of the wind.

Didn’t really have a lunch stop, as I assumed I’d be in Milford for mid-day. Instead, lunch was few handfulls of peanuts and a snickers bar outside a church.

A lot of the day was spent crossing lowland pasture land, moorland and a very small amount on the coast.

END_OF_DOCUMENT_TOKEN_TO_BE_REPLACED

Sort of close to Cardigan.

According to Strava, I’ve ascended the equivalent of Ben Nevis today, around 4,500ft.

It certainly felt like that. Heavy trunk routes, endless traffic, hills and noise were all too apparent in their absence, and that was only in the last 5 miles.

After that day of tireless effort, what could be better than being greeted by an angry Brummie proprietor, initially a little annoyed because you’d arrived 10 mins before check-in.

END_OF_DOCUMENT_TOKEN_TO_BE_REPLACED

Without doubt the best day by any metric.

Start the day at Celtic Hotel

With a full breakfast, but hang on, can you squeeze a continental in there too? Hell, let’s do both. Alpen, milk, fruit, honey, full breakfast, coffee, fruit juice, toast.

The full hit. Some of the other guests weren’t impressed by the amount of food that was put on for me, I could tell by the looks I was getting. In Caernarfon terms, the Celtic is fairly high-brow. F*ck them.

Ate it all apart from 2 rounds of toast.

I’ve said this before. If you want to start the day full of exercise, the best way to start it is with fructose, that’s fruit. It goes into the blood stream quickest and will give you the greatest start for the least effort in energy terms. In addition, you need a heavy dose of carbs, these are absorbed slower and will release energy further into the day at a steady pace. Any fatty food is no good IMO, it bloats you, slows you down.

Generally the full-breakfast ain’t as good as the continental for the best start for a cyclist.

Must have been a particularly low in fat full breakfast because it didn’t bloat me or slow me down at all.

All in all, the perfect start to the day! I felt right till I got to Harlech!

The sun is shining!

That bright blue orb, sorry yellowish orb we call the ‘sun’ was in the sky.

Even thought it was cold, at 9am when I got going, the sun was out!

Not only that, there was very little wind!